Since moving to Discourse, we have decided to consolidate all the old patch notes, here are the complete changes from 1.0.0 to 1.6.0

Starting in patch 1.1.0 we will introduce 64bit Neocron. We will be discontinuing support for 32bit and also no longer officially supporting Windows 7. The decision was made based on the EOL of Windows 7 approaching, and the need for a 64bit operating system to run Neocron now. We continue to support Windows 8.1 - 10 and are unofficially supporting Wine on Linux and macOS. 64bit Neocron will allow us to improve the game more with faster load times, better asset security, and a whole lot of memory to play with.

One of the things i was looking forward to was a non pa viper king armour setup with poison resist to the whole body…now just chest…screw this.
Why on earth did you do this. Who asked for this? He be burned at the stake

The system has always been there but was broken. It was meant to apply armor to sections and not to others. We have fixed this system in the code and will be improving balance of armor soon. We are looking at adding all kinds of new armors to help balance things out.

Hey quick question. These new armor to damage reduction curves; Are they deviating from Neocron 1 with the idea of improving the system or is it an attempt to revert NC2 back to NC1 calculations? Just curious as I’m surprised to see stuff like that already being worked on!

This is a great question! We had posted the pre change curve, and post change curve on the Discord but that may have been missed. 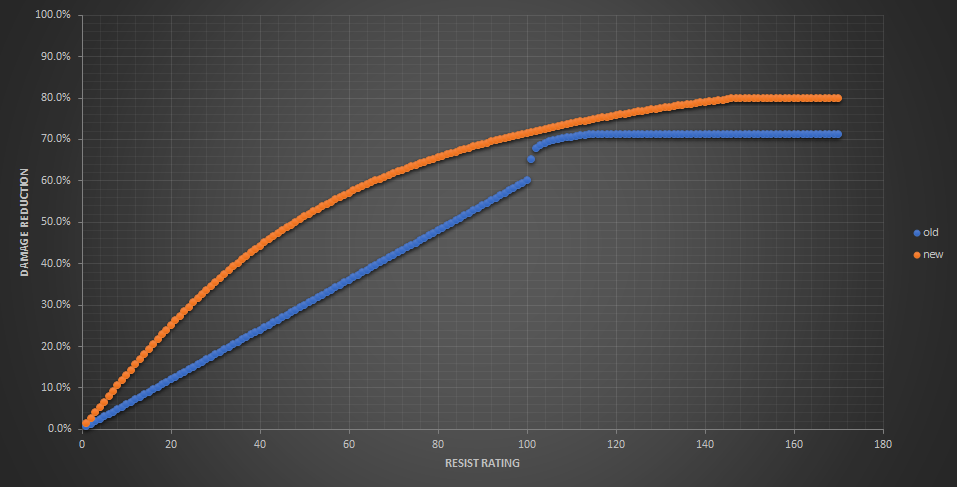 The blue is original, the orange is what we’ve changed it to. As you can see the original was…odd…very very odd. We have been making small adjustments and testing multiple setups. We want people to still have the ability to have a great custom setup so this is NOT the final product of this. We just saw the awful curve and made a more sane one. It is touching on balancing but it is really needed to help improve gameplay and being able to troubleshoot damage issues.

“Starting in patch 1.1.0 we will introduce 64bit Neocron. We will be discontinuing support for 32bit and also no longer officially supporting Windows 7. The decision was made based on the EOL of Windows 7 approaching, and the need for a 64bit operating system to run Neocron now. We continue to support Windows 8.1 - 10 and are unofficially supporting Wine on Linux and macOS.”

This “64 bit revolution” patch made the launcher broken in Windows 7, fair enough. But could someone please shed some light on how to make it work on Linux…? It is just as broken on Wine/Linux as Windows 7 for me, it just won’t patch and install anymore.

Neocron Classic itself will run on Linux. However, the game must be installed and patched through Windows.

So the unofficial support for Wine on Linux and macOS is that we will tell you what we know, what our experiences is and move along with our development.

So far this is what I know about the Wine situation…

Our launcher uses a special patching system written by us. For some reason in Wine it just craps the bed with no error. It is looking like a memory issue, but we haven’t been able to isolate the issue because there is no solid error that specifically says “This is caused by X”. It is just that Y has failed and that is all we know.

I don’t know what is wrong with the launcher and Windows 7? Can you submit a ticket to our support system (Its fixed now…hipster garbage…) https://support.neocron.org and I will take a look at what is going on. We have not had any other issues reported with using Windows 7, so this may be something unique to your system or an oversight somewhere on our end.

Ok. So if I understand this right, you are aware that the launcher is broken on Linux/Wine and for some reason is unable to patch/install the client.

But I am surprised to read that you are surprised that I am having problems running the launcher on Windows 7. So what you are trying to say is that as far as you know the launcher should still be working on (64bit) Windows 7, and that I am the only Windows 7 user who is experiencing the same broken launcher behaviour as on Linux/Wine?

I actually had two pc’s side by side on 64bit Windows 7, which was running Neocron Classic fine until this 64bit patch. Then the launcher failed to update the client on both, so if this is something unique to my system it’s not unique to one pc/system, but rather to all my Windows 7 systems.

There is possibly one thing unique to my Windows 7 systems vs. other people’s. I did not want the latest and greatest in Windows 7 “telemetry” (Microsoft spyware) and certainly did not want any forced upgrades to Windows 10, so long time ago I put Windows Update on 100% manual and I’ve been extremely selective when installing recent updates. Maybe the most recent launcher have some dependencies which requires one or more updates I have not done?

Now, I recently had to replace one of the computers running Windows 7, and the new one is running Linux. But I’m going to try updating the remaining Windows 7 system with absolutely everything available and try installing Neocron Classic again. If that still doesn’t work I’ll try the ticket in your support system.

After Windows Update and the latest Neocron Classic installer .exe downloaded, it installed and patched on the Windows 7 system, and filled that clients\retail directory with a working client!

I then transferred that client into the Linux system. Like you said, it’s actually running there as well. Although I notice a few things to investigate further, like missing music and to me it looks like exit to system happens in a somehow crashing fashion rather than a clean exit.

Thanks a lot for the response and help!