What was the point of killing the old forum?

Do you plan to do some game integration with the forum? Seems like you didn’t like the functionality of it but from a users perspective I thought it was fine and served its purpose. I’m just disappointed we lost 3 years with of back and forth, even ole MJS chiming in.

A number of reasons honestly…

The reasons go on and on, from spam accounts to trolls etc. etc.

Moving on, we have the following planned…

It was a tough decision as I really liked some parts of vBulletin, but towards the end it got really bad. A few issues that we were told to just live with were the WYSIWYG editor being a complete pile of dog shit. Formatting patch notes was a living hell, and half the time I didn’t even want to bother posting patch notes because of the poor formatting vBulletin offered. Also, our version was no longer being updated. We were being forced into a new product with a completely new theme engine that could not achieve the same theme we had currently running. It was either move to that, or use an insecure product on an insecure version of PHP.

I also updated your signature for you. You’re welcome.

I also updated your signature for you. You’re welcome.

Did you think about a Kickstarter project for financing or an EA on Steam?
Propably you should get enough money for 6 month salary…
But I think you don’t have the licence from Reakktor to make money with the game?!

We have no plans to do a kickstarter. We don’t own the IP to the game, so I can’t see any logic in fund raising for an IP we don’t even own, at least on that level. We do have (and plan on continuing to have) donations for server costs and such.

Edit: Also Reakktor doesn’t own the rights to NC. Kirk owns the full IP for neocron.

As for steam, as far as I know we plan on trying to put it on steam once we get it further along.

No body’s signature is showing up for me. Guess I need to go into settings.
Thanks for the response.

so you moved to a system thats based on nodejs ? someone’s been smoking the whacky weed again.

so you moved to a system thats based on nodejs ? someone’s been smoking the whacky weed again.

No. Where did you read this?

The board isn’t based on nodejs. The backend is RoR and postgres, with redis. The frontend is Ember.js, which you do use nodejs to install, but good luck finding much in the JS world that doesn’t at least use NPM on some level.

Both Discourse and Ember.js are actually fairly widely used. Discourse is the forum software also used by EVE Online, Blizzard, Gearbox Games, Funcom, github atom discussion board, Rust lang discussion board, docker, Patreon, Imgur, and a bunch of others.

And frankly if you’re going to give this forum shit for having any component even require some level of node or npm, but were ok with EOL versions of PHP (or PHP at all), I’m going to have to question your sanity.

Edit: Also ember.js has a ton of users: https://emberjs.com/ember-users 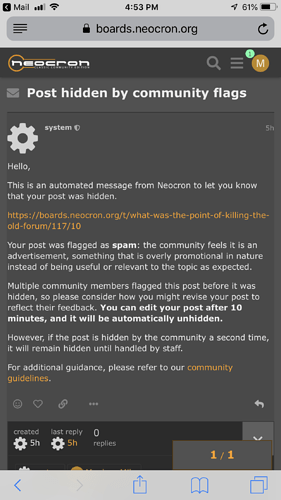 This forum is trash.

I removed your post. It was spammy and off topic. If you have a problem with that feel free to PM me.

If it’s trash, nobody is making you use it.

Starting off great. First, signature was edited, then post deleted. It’s almost like i’m on the NST forums. Keep up the great work!

Starting off great. First, signature was edited, then post deleted. It’s almost like i’m on the NST forums. Keep up the great work!

If you don’t like it here nobody is forcing you to be here. You aren’t paying for anything, you aren’t out any sub price. The door is over there, and if you like I could help you find it.

I have no idea what crawled up your ass in the last year but you used to be a decent person and supporter. We aren’t a paid company, we aren’t even paid developers. We do this in our spare time. SPARE TIME. For you to come here and demand things of us would be like us coming to you and demanding that you donate your time for free to do work and then we tell you that we expect a deadline.

So want a real post? Fuck your signature. The ETA to release is when we’re fucking done. We all have lives and work to do to keep our fucking bills paid you selfish fuck. It is a god damn video game and you’re fucking lucky that we’re still working on it. Take your elitist attitude and fuck off back to the NST or where ever the fuck you came from.

You better hope we treat this like the NST would, otherwise the next sideways fucking comment you make here I’ll ban you. We aren’t the NST and we don’t put up with this fucking bullshit from the community. Either appreciate that we do this for free or fuck off. We aren’t in it for profit, so you leaving literally means fucking nothing to us.

The signaute was posted in Italics just poking fun at everyone that asks for an eta or update… the gif was in jest because you all were going over my head with forum nerd speak.

You should take a step back and have a deep breath and a chill pill. It’s a game man, try and have some fun.

ETA: I did donate money to keep the server up. Guess i’ll just go fuck myself tho.

Also, I can see that Lykos is replying. This forum maybe kinda cool. Looks like it will be a nice upgrade from the other format.

You should take a step back and have a deep breath and a chill pill. It’s a game man, try and have some fun.

I’ve been beyond chill for a long time. Lets list the shit we’ve had to deal with so far during this project…

I can also see your edits in real time, as well as you seeing me type.

Your donation was appreciated and used, and now its long past that and we’re still paying out of pocket for the expenses. Honestly, your donation was the LAST donation we ever got. We did not post this, we did not ask for more donations, in fact we didn’t even move the thread talking about donations. We understand that we’re behind on schedule and we’re working to catch up so we’ve literally bitten the bullet and covered all our expenses out of pocket without pushing for donations in any way shape or form.

So to tl;dr it for you, its a dead painful horse at this point and the signature literally rubbed the entire team wrong. We haven’t had any donations in almost a year (October 2018 to now) and still have those people demanding to know why we aren’t done yet.

We’re trying to upgrade the game and security overall and people fight us every single step of the way. At this point, if we didn’t like the game ourselves we would just shut this public shit show down.

Edit: If you want to poke fun with gifs add SOME kind of context so we know that. It looked like a solid derailment.

I pretty much only talk in Gifs now.

https://media0.giphy.com/media/l1J9C5fDG5THfNJgA/giphy.gif(image larger than 4096KB)
next page →